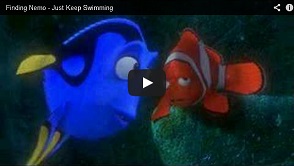 Every once in a while I like watching a ‘feel good‘ movie. Even better if it’s a movie the whole family can enjoy watching together.

Finding Nemo isn’t a movie that I would usually choose to watch, but it came on Freeview television the other day, and so we all just kinda sat in front of the box together.

The movie took me back to a time when my two boys were still in nappies, and I had just started learning affiliate marketing. I got the movie out on dvd back then, and we would watch it together in the living room after they woke up from their afternoon nap.

And here we are – close to a decade later watching it again, but this time they are all grown up.

Anyway, back to Finding Nemo.

Marlin who is Nemo’s Dad, had only one objective in his mind, and that was to find his son, who had been taken by a scuba diver.

And with little to go on – he just put one fin (wink) in front of the other and started swimming … nothing was going to stop him from finding Nemo … not even blood hungry Sharks or stinging Jelly Fish.

And this is the same attitude an affiliate marketer has to adopt.

Which can be summed up in my three ‘Be’s.

When I started my online career I quickly realized that I wasn’t always going to get ‘things’ right the first-time.

But I had to try.

In fact I didn’t get it right second or third time either.

This can lead to frustration and it’s easy to turn into a ‘Mr Grumpy Gills’ when things don’t work out the way you envisioned … and this is where some people give up.

… AND follow a proven plan, then it will be IMPOSSIBLE to fail.

Yes, you might feel as if you are swimming in some deep water sometimes … and the path a head may look treacherous and filled with uncertainty …

… but if you just keep swimming, then success is as predictable as the sun rising in the East and setting in the West.

WARNING: The content in the video may stay in your head the entire day.