Have you ever tried to train a cat? Not the easiest thing in the world to do, but I have always been successful at getting cats to do two things, respond to their names and to come in for dinner.

When we picked Molly up from the cat protection league her name was Claudine, which we obviously changed, but it took her a little bit of time to start responding to that name.

However, after about a month and a few treats later Claudine slowly became Molly and now every time we call her name, her ears prick up and her eyes get wider which is when we know that our training methods are working.

We don’t have any fancy training methods, but a piece of chicken seems to do the trick every time.

Mention the word “chicken” and where ever Molly is hiding, either in the bushes across the road at the next door neighbors house, on the roof, under the house or in a tree, she comes bounding home dodging obstacles along the way, almost oblivious to cars racing down the street, or kids riding their skateboards and bicycles on the footpath.

And as she skids in to home base she looks up in anticipation for some meaty goodness to which she is always rewarded (even if it isn’t chicken). Which is sort of reminiscent of the story of Pavlov’s dogs, except this is the cat version.

But, she doesn’t always do what we want her to do. It seems cats tend to just please themselves and do whatever they want, whenever they want. So I am always pleased when Molly responds to my voice, even if it is ‘tummy love’.

However, what I realized recently is that I am not the only one doing the training at home.

Molly tries to train me.

Here’s a picture of Molly sitting in front of my office window wanting to come inside. 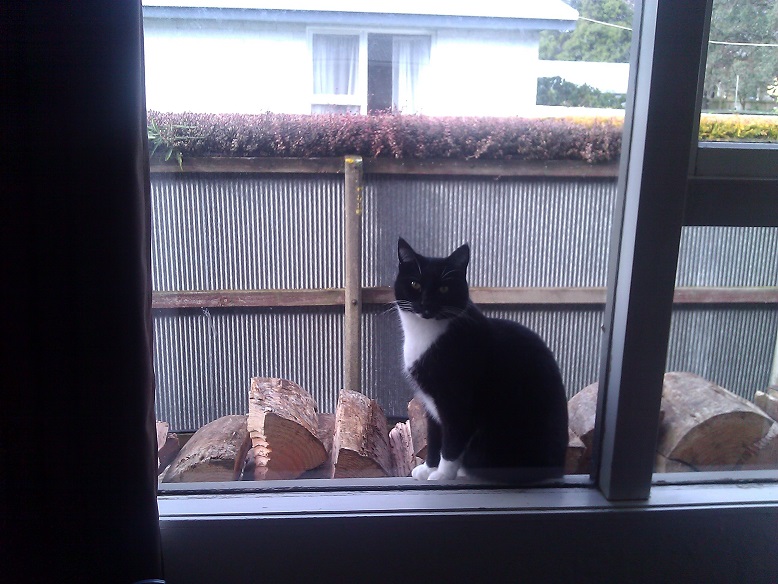 Every morning I let Molly outside to play and to you know “take care of business” since she doesn’t use the litter box inside the house anymore. And after ten, twelve or more hours of sleep I think she’s more than happy to go run around and play outside.

So, during this time I have breakfast and then I start work.

Fortunately I don’t have to go far, because I work from home as an affiliate marketer and have one of the bedrooms converted into an office.

Molly seems to know what time I start work. So at around 10:00am in the morning, like clock work, Molly appears outside my office window as shown in the picture above.

So of course I get up and let her in.

However, as I became aware of what she was doing (i.e. training me to let her in), I realized that as her owner, I should be the one doing the training in my household and not her.

So the next day when Molly got up on the window ledge I ignored her, thinking that after a bit of time, she will just give up and go wait at the door like a normal cat. But as I ignore her, I feel her blinking eyes tapping on the back of my head like Morse code saying … Let Me In Daddy.

As cute as that might sound, I did what any real man would do …

… I decided to run a few of experiments.

The first is to draw one side of the curtain so Molly can no longer see me. This should do the trick (I think to myself), and at least I won’t be able to see her morse code eyes. But after a minute Molly gets up and moves to the other side of the window where she is once again in plain sight – blinking away at me.

So I draw the other side of the curtain, and open the first, so that once again Molly can’t see me and I can’t see her, but Molly moves back to her original position, so that she is in full sight again.

Finally I draw both curtains so the window is fully covered, but after a minute or two I begin to feel a little mean, and as I peek through a slit in the curtain to see if she is still there, I hear a meow, and then the morse code thing comes back,  so I get up and let her in.

So although Molly wins this round, I am the winner at the end of the day because I have such a clever cat.

But one thing that all new affiliate marketers can learn from this story, and you’ve probably heard it time and time again is, persistence pays off in the end. If something is not working for you, then approach it from a different angle (go to the other side of the window).  And if that doesn’t work, then try something else.

If you want to learn how to make enough money to work from home like me then let me help to coach you.