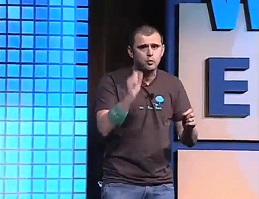 Some might call Gary Vaynerchuk controversial, some my call him arrogant, but whatever you call him, there’s no denying his passion for what he does.

If you have sensitive ears then Gary might not be the person you’d listen too, because he has a flare for using four letter words wherever possible. It doesn’t bother me though, because the content of what he shares is extremely insightful.

“… look yourself in the mirror and ask yourself, what do I want to do for the rest of my life? And then do that.  I promise you can monetize that s^*!“

I guess Gary’s basically saying that whatever your passion, there is a market out there for it.

Gary took over his families business that was earning over two million dollars a year and in a seven year period grew it to point where it was making over 50 million.

So you could say that this dude knows a thing or two about business, and what it takes to be successful in business.

What I like about Gary is that he tells it like it is, whether you like what you hear or not. He does mention the word “transparent” in the video below, so I guess he practices what he preaches.

Gary also says that you should create a blog

Figure out what you’re passionate about and then blog about it. Identify your audience and then create content that will help solve their problems.

Creating a blog is one of the easiest parts (but NOT the only part) of the monetization process, but there is certainty around it. Meaning all you have to do is to follow a few steps to get the blog setup.  The other parts entail driving traffic and then monetizing that traffic.

If you would like to learn how to start this process then take a look around on my blog, or join me here for some coaching.